Some patients may benefit from hip resurfacing over replacement


By Jim Dryden
When a person loses mobility because of arthritis, surgeons can replace the faulty hip joint with a new one. A new study led by researchers at Washington University School of Medicine in St. Louis suggests that a different procedure called hip resurfacing may be a better option for some patients, particularly those who are young and active. 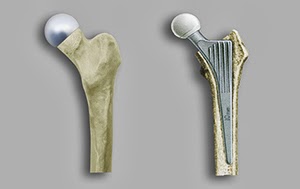 In a study of 806 active patients aged 60 and younger who had hip replacement or hip resurfacing surgery, researchers found that a year after the operations, those who had the resurfacing procedure reported that they were less likely to limp, experience thigh pain or perceive a discrepancy in the length of their legs. Those who had resurfacing surgery also were more likely to return to the activities that were the most important to them. These included distance running, walking for long distances and even high-impact sports like martial arts.

The study was published in the journal Clinical Orthopaedics and Related Research.
“Hip resurfacing wasn’t approved by the Food and Drug Administration until 2006,” said first author Robert L. Barrack, MD. “The implants cost a bit more, the procedure is technically more challenging for the surgeon, and there potentially are some complications unique to the procedure, such as allergy or tissue reaction to metal particles, but these are very uncommon in properly implanted, FDA-approved devices.

Barrack is the Charles F. and Joanne Knight Distinguished Professor of Orthopaedic Surgery and co-chief of Adult Reconstructive Surgery at Washington University School of Medicine. He’s also the chief of service for orthopaedic surgery at Barnes-Jewish Hospital.

He said for doctors to recommend hip resurfacing, it’s important to demonstrate that a patient stands to benefit over traditional hip replacement. Earlier studies in Europe, Canada and Australia made claims that patients could be more active with fewer limitations, but other studies recommended against resurfacing, particularly in women and men of small stature.

Hip resurfacing only reshapes the surface of the hip joint, which is where the head of the thigh bone, or femur, plugs into the cup-shaped surface of the pelvis. In a total hip replacement operation, the entire femoral head and a portion of the femoral neck is removed and discarded, and a stem is inserted several inches into the middle of the femur (thigh bone) to connect it with the hip joint’s “ball and socket,” where the head of the femur connects to the pelvis. The surgeries were performed at Thomas Jefferson University in Philadelphia, the Anderson Orthopaedic Clinic in Virginia, Midwest Orthopaedics at Rush in Chicago and the Center for Hip and Knee Surgery in Indiana.

The University of Wisconsin Survey Center collected data from telephone surveys of the more than 800 patients involved in the study. Those conducting the surveys didn’t know which procedure a patient had undergone, helping to eliminate bias in the study’s results.

Barrack and his colleagues compared people of about the same age with similar activity levels, using a scoring metric developed at UCLA. All of the patients who took part in the study had a UCLA activity score of at least 6 on a scale of 1 (least active) to 10 (most active). Barrack
“We wanted to ensure that every patient enrolled in the study had a very high activity score before being limited by hip problems,” Barrack said. “When patients spoke to the surveyors a year after their operations, the vast majority of resurfacing patients had attempted to return to a high level of activity, but that wasn’t true for hip replacement patients.”

The resurfacing patients also reported less thigh pain. In a subsequent study presented in the fall at the annual meeting of the American Association of Hip and Knee Surgeons, Barrack’s colleague, Ryan M. Nunley, MD, assistant professor of orthopaedic surgery, reported that total hip replacement patients were more than three times as likely to have thigh pain than hip resurfacing patients.

Another recent publication from the Washington University group that followed hip resurfacing and hip replacement patients of similar ages and activity levels showed that hip resurfacing results in less bone loss over time.

Many of Barrack’s patients come to him because they want hip resurfacing rather than a replacement procedure, but he said that not everyone is a candidate.

“Surface replacement isn’t for everyone,” he said. “Only about 10 percent of patients are ideal candidates, and a study in The Journal of Bone & Joint Surgery recently recommended that most women and men of small stature avoid surface replacement, but if a person has arthritis without complications, is young and active and wants to return to a high level of activity after surgery, the data suggest there may be advantages to surface replacement over total replacement.”
Posted by Connie at 5:35 AM