Great confirmation below of the hypotheses put forward in other journal articles about the chromium and cobalt effects on the system.  Best article published previously on this topic was the article which appeared in Acta Orthodaedica in 2008, 79 (6) 734-747.   Metal-on-metal hip resurfacing arthroplasty published  by the guys at Oxford.  I wrote many posts on this to explain what they did and what they found.  Pages 742-743 discuss this process in detail (metal induced intracellular effects.)  Essentially, they reviewed the same information as is reported below.

http://www.mydepuyhiprecall.com/2011/07/review-of-cell-biology-surrounding.html  (series of about 10 articles on this topic.)  Again in 2011 a compilation of the Evidence So Far appeared in the Journal of Bone and Joint Surgery.  This was also published by the Department of Orthopaedics, University College 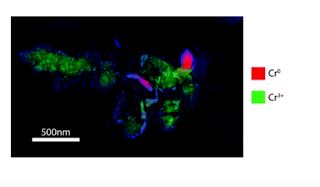 Why some metal hip replacements fail
By Elinor Hughes
An investigation into why metal-on-metal hip joints fail long before other types of joints, such as metal-on-polyethylene and ceramic-on-ceramic, has revealed how the metal particles shed by the joints grinding against each other damage surrounding cells. The work, carried out by scientists in the UK, Canada, the Netherlands and the US, could lead to ways to predict which patients will have problems with these joints.
One theory why metal-on-metal hip implants fail points to the debris that is generated as the joints wear. It is thought that the debris is not compatible with human tissue, which causes the metal hip joints to fail, but it’s not known why.
In metal-on-metal joints, cobalt–chromium nanoparticles are worn from the implant. Some patients are very susceptible to these particles, but it’s not known which patients yet. When a patient reacts to the particles, their tissues become inflamed and sometimes bone and muscle is lost.
Now, Alexandra Porter, David McComb and Mary Ryan from Imperial College London and colleagues have used microscopy techniques to reveal what is in this debris and what effect this has on individual cells.  [see photo image above....really amazing]
What they found was that the cobalt–chromium particles gradually released cobalt(II) inside cells, which affected their structure. The team saw that the cobalt(II) had caused mitochondria (cellular power sources) to swell, a finding consistent with the effects of oxidative stress, and that there were abnormalities in the cells' nuclear membrane. ‘This work is a snapshot of very high resolution in-human corrosion of metal from hip replacements,’ says Porter.
‘Recent failure rates of some types of metal-on-metal hips have tainted the field of total hip replacement, which as recently as 2007 had been described as “the operation of the century”,’ says Thomas Joyce, a biomedical engineer specialising in the design, testing, analysis and evaluation of artificial joints at Newcastle University, UK. ‘In the UK, the number of metal-on-metal hips implanted has declined markedly, but worldwide, there are hundreds of thousands of patients who have been fitted with such devices. These individuals need to be supported and research shared with them and medical professionals so that the best clinical decisions can be made.’
Porter and her team’s findings could lead to a way to ‘predict which patients are more likely to develop problems, using blood levels of cobalt and chromium, and by using specialised MRI scanning that suppresses the artefact from the metal hip implant and enables the surrounding tissues to be seen,’ she says.
REFERENCES
1. A E Goode et al, Chem. Commun., 2012, DOI: 10.1039/c2cc33016d
Posted by Connie at 6:59 AM