Why Berkshire Sold Most Of Its Johnson & Johnson Holdings


We are amazed that Johnson & Johnson (JNJ) has seen the recent reversals of fortune that it has endured. We first followed JNJ back in the 1990s, and we remember the company as being able to consistently generate strong profitability, growth, and even a dividend to shareholders. While the company is still able to grow its dividend, we can certainly see that JNJ has lost its mojo. We're sure that Warren Buffett of Berkshire Hathaway (BRK.B) can see that JNJ has been struggling since Berkshire first invested in it back in Q2 2006. This was around the same time that JNJ announced that it was buying Pfizer's (PFE) Consumer Healthcare business for $16.6B in cash. According to Morningstar, JNJ has followed up that deal with $27.5B in additional acquisitions, most notably the $17.7B acquisition of Synthes. 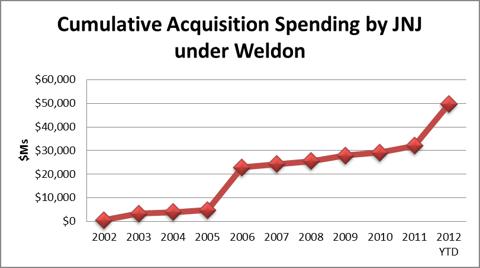 After further review, we can see that Bill Weldon's deal-crazed acquisition spree as CEO of JNJ did not add value to the organization. However, JNJ was able to post increased product recalls under his watch. No wonder Professor Sydney Finkelstein at Dartmouth named him one of the worst CEOs of 2011. We were glad that Weldon announced his retirement due to ill health in February (JNJ's board was sick and tired of muddling in mediocrity), and his retirement eliminated a huge hole in the CEO's office. JNJ's Board tapped its Vice Chairman, Alex Gorsky as CEO, and Gorsky assumed the role on April 26th.

Despite Weldon's terrible tenure of management mediocrity as Chairman and CEO of JNJ, he remains Chairman of JNJ's board. We can see why Berkshire sold the majority of its JNJ holdings. We believe that Buffett has the patience of a saint with regards to JNJ, considering that Berkshire still holds 10M shares of the company despite the fact that its results have been very pedestrian since its 2006 acquisition of Pfizer Consumer Health. 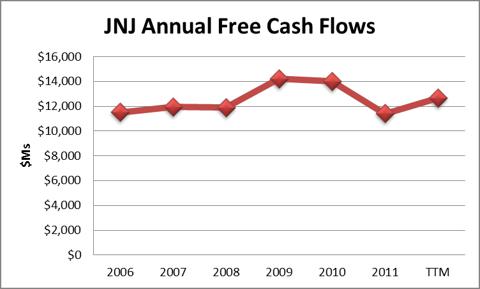 Source: Morningstar Direct
We now see JNJ pursuing the $100M acquisition of Shanghai Elsker, a Chinese baby-care product maker. Even though it's a tiny little bolt-on acquisition, we think that the company should not bother with any more deals until it can start generating improved levels of adjusted organic growth. JNJ had $4.57 in EPS in 2008, and it is expecting to generate adjusted EPS of $5.06 in 2012, according to consensus estimates. This represents an unremarkable 2.58% compounded annual growth rate during the 2008-2012 time period.

Despite spending nearly $45B on acquisitions since 2006, JNJ's annual revenues have only increased $11.7B from 2006 to 2011. The $45B JNJ spent on acquisitions, net of cash acquired, represents 24% of JNJ's market cap and unfortunately, has only increased its revenues by 23% in the same time period. We see JNJ as a big, hulking ship that is lost at sea and is way off course.

In the first half of 2012, JNJ had generated flat growth relative to H1 2011 levels. Operating revenues only increased by 2.2%, excluding currency headwinds. Negative currency headwinds (-2.7%) ended up absorbing JNJ's meager operating revenue growth, and resulted in a -0.5% revenue decline year-over year in H1 2012 versus H1 2011. Non-recurring expenses the company excluded as adjustments to Net Income included the write down of $939M from its intangible asset base and $611M on litigation expenses.

In conclusion, we can see why Berkshire sold nearly two-thirds of its stake in Johnson & Johnson. While we believe that JNJ is certainly a big, well-established pharmaceutical and health care products company, we believe that its glory days of gazelle-like growth in the 1990s and early 2000s are no more. We have lost confidence in Johnson & Johnson's ability to manage the company effectively on behalf of its shareholders, and we believe that it will take time for Alex Gorsky and his management team to right the ship, especially with Billy Weldon continuing to serve as Non-Executive Chairman.

We would like to see the company bring its focus away from acquisitions and towards organic growth. While we continue to expect the company to boost its dividend and buy back shares, we believe that dividend growth will decelerate. Even with the headwinds facing Johnson & Johnson's growth, the company is still trading within 3% of its 52-week high, and we think that it is too early to establish a long position in this company. 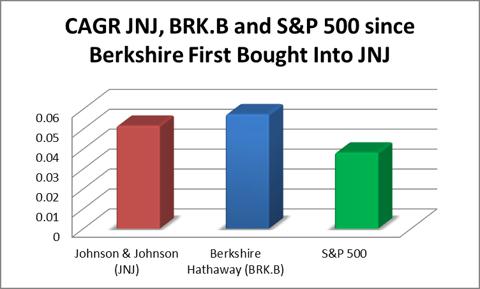