This is a great summary diagram of what can happen when metal particles (Chromium and cobalt) enter into the cell.

1.  Metal particles are outside of the cell
2.  Chromium 6 crosses the cell barrier and is oxidized to chromium 3.
3.  Chromium 6 is the MORE toxic chromium.
4.  That is not to say that Chromium 3 is not.
5.  That is also not to say that because Chromium 6 is immediately oxidized to chromium 3, there is no issue. (Follow the green highlights in this illustration to see the end point.)
6.  Even if Chromium 6 is oxidized to chromium 3, Chromium 3 seems to have as one of 3 end points, DNA damage which is the first step in a cancer process.
7.  That doesn't mean that it gets to cancer but it is a great illustration of the path options which chromium 3 can take.
8.  If you read yesterday's post, this diagram is an explination of the steps discussed  in that post and the diagram was taken from the same journal article (link is above).

this was all quite complicated to me  but this picture simplifies this greately.  If there is a conflict between what I said above and what is written below listen to the experts below.  I tried my best to boil this down so we can understand the issue. 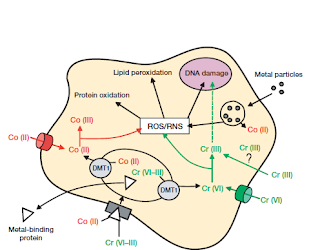 "Different pathways are used by metal ions to enter into the cells. Cr (chromium) 6 can cross the cytoplasmic membrane through the non-specific phosphate/sulfate anionic transporters. Within the cell, Cr6 undergoes rapid metabolic reduction to form Cr 5, then Cr4 and finally Cr 3.

At each step, of Cr reduction from Cr6, reactive oxygen species (ROS) and reactive nitrogen species (RNS) are generated. Whether or not Cr 3 is able to cross the cell membrane on its own without a carrier remains controversial. Co (cobalt)2 can cross the cell membrane using the non-specific ion transporter and it is oxidized in the cytosol to Co 3. Co-oxidation leads to the generation of ROS and TNS. Co 2 and CR 6-3 can also bind some metal-binding proteins such as transferrin or ferritin. In the endosome, Co 2 and Cr 6-3 are unbound from their protein carrier via the DMT1 transporter. They are released in the cytosol where they can be reduced or oxidized and result in the generation of ROS/RNS. ROS and RNS are known to be involved in the oxidation, leading to their degradation,lipid perodixation and DNA damage. Cr 3 can also cross the nuclear membrane and particpate in alteration of DNA.

Metal particles released from the articulating surface of the MoM prosthesis can be phagocytosed by the cells. Inside the phago-lysosome, particles become corroded and release metal ions in the cystol.
Posted by Connie at 2:10 PM